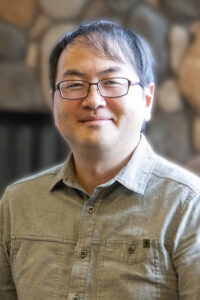 Although he grew up in a very ordinary family with a mixture of Japanese non-religion and culture, God’s mysterious guidance led him to attend a Southern Baptist affiliated private high school. During his high school life, he began to question his path and the meaning of life, fell into a deep state of withdraw, and had a difficult student life. Meanwhile, he visited Portland for a short time where he received support and care by various Japanese Christians. He met the Lord Jesus Christ and had life changing experience.

While studying at a seminary, he served as a staff member at a local Japanese church for seven years, ministering and helping Japanese international students. At the same time, his wife Mariko was studying youth ministry at Multnomah Theological Seminary. Together they started serving in youth ministry together. It was such a blessing and privilege to be able to work closely and serve students who had life-changing experience while studying abroad.

Yoshiki became involved with the launch of Simple Truth International Church in 2014, mainly teaching the Bible in Japanese. Simple Truth merged with Village Church in September 2021 and he joined Village staff as the Pastor of Japanese Ministry. He continues to work in bi-vocational ministry as a manager at a Japanese company and serve at Village. He is grateful for the roles God has given him and to see Him at work in the workplace.

“My wishes and prayers are to be rooted in this land, and through the beautiful multilingual and multicultural body of Christ, the gospel of the kingdom of God is preached to the Japanese community, and through the testimony and work of the transformed lives who bear fruit that this land is transformed.”